Bing Translate Vs Google Translate: Which Translator is Best? 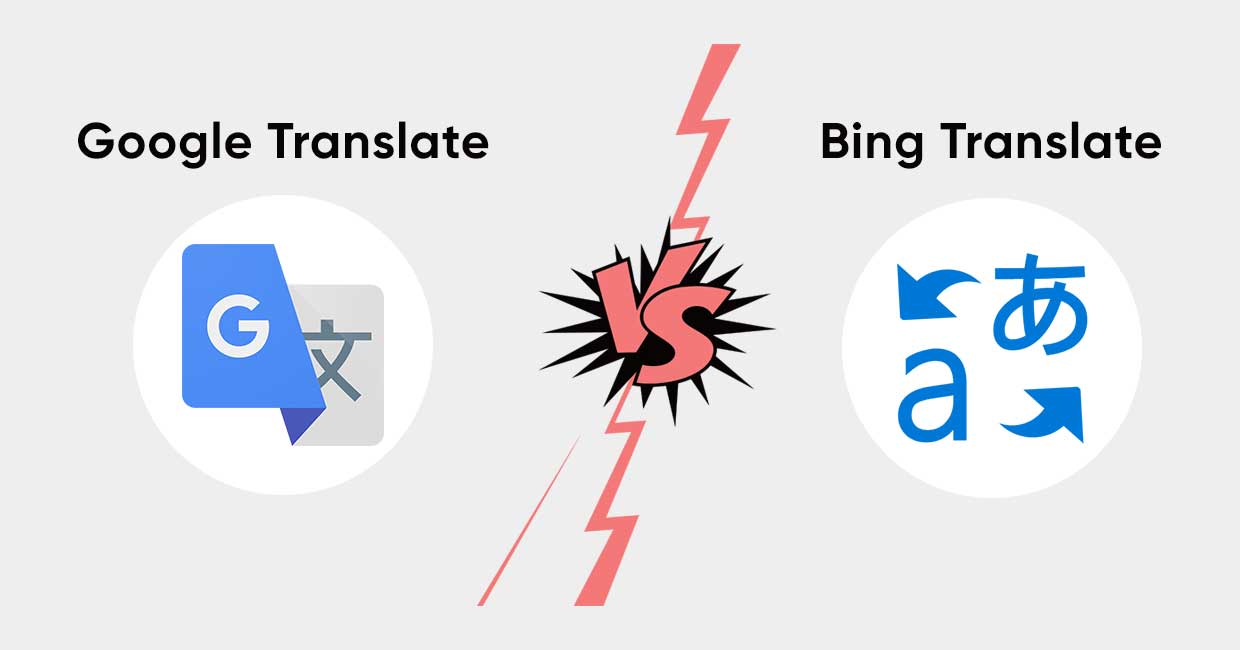 “Which is better: Bing Translate or Google Translate?” – Anonymous

The way you translate between languages via free online translators like bing translate or google translate. It is a whole new game based on several factors such as accuracy, speed, language support, and more.

We know that Bing Translate is performing awesome due to some of its characteristics, but it doesn’t make Google Translate entirely lagged out from the competition. On the contrary, it stands firm and is best in some of its features.

However, this comparison may sound too intimidating, especially when you aren’t a tech junkie. Or, you may not have enough time to deeply review each of the Bing Translate and Google Translate factors, which we already did for you in this comprehensive comparison guide.

We want to advise you to check the features of both the translators first before deciding on the better one, even if you’re thinking of using it for free. It will help you gather accurate knowledge and assist you in accessing certain features you may be unable to operate without prior knowledge.

So, let’s start by introducing Bing Translate and Google Translate without any further delay!

What is Bing Translate?

It is Microsoft’s latest version of the machine translation mechanism that was launched between 1999 and 2000 by Microsoft Research. Ultimately, Bing Translate was established in 2007, previously called Windows Live Translator.

The approach of Microsoft for machine translation is primarily data-driven. They aren’t dependent on writing explicit rules to translate the natural language. There was an API up-gradation in Bing Translate in May 2018.

The Bing Translator offers the following key features. So, let’s decode them without any further ado!

Bing Translate provides three different methods of your query inputs through the camera, keyboard, or voice. If you’re using it on your smartphone, you can tap the convenient button at the bottom of the screen to swap both the input and output languages.

Use your keyboard for search.

One of the neatest features of bing translate is its camera input. After setting your language preference, you must point the device’s camera at the specified text as in information.

You can use this camera feature on books, outdoor ads, street signs, etc. However, its augmented-reality feature isn’t always reliable.

As the name suggests, the feature comprehends the spoken words to get accurate translations as output. You’re required to tap the stop button after you’re done speaking, and it also has the speaker option to hear the transactions aloud.

The format of the Bing Translator is almost identical to Google Translate. After you enter the https://www.bing.com/translator/, you will observe a web page containing two boxes.

The box at the left is an input language, whereas the box at the right displays the output language. You can select the wording within the boxes from the drop-down menu.

Bing Translate currently supports a total of 111 languages at the time of writing this article. The languages include Assamese, Armenian, Bulgarian, Chinese, Latvian, Serbian, etc.

What is Google Translate?

Google translate was launched in April 2006 as a statistical machine translator. Currently, it translates various forms of text such as words, webpages, phrases, etc.

Google translate introduced an Android app in January 2011 and an iOS version in February 2011. Furthermore, Word Lens was acquired by Google in May 2014 to enhance the quality of its voice and visual translation.

Google Translate is a versatile translator developed by Google to translate various forms of media and text, and speech within the moving or still images.

It contains a feature to translate text or written words into a foreign language.

It can easily translate the entire webpage to selected languages.

It consists of a feature that quickly translates spoken language into a chosen foreign language.

It is a feature that translates the uploaded document into a selected foreign language. The documents are available in the format of .docx, .doc, .odf, .pdf, .ppt, .pptx, and more.

Recently, Google Translate released a new feature known as ‘Tap to Translate’ 2018. It enables quick translation within any app without even switching or exiting.

This feature enables handwritten language translation on the phone’s screen or the writing drawn over a virtual keyboard.

This feature determines the text in the image captured by users and quickly translates it via images.

It is an updated feature of Google Translate via which you can easily transcribe speech into multiple languages.

Google Translate and Microsoft’s Bing Translate are the two famous translation tools offered by the world’s largest tech companies. Both of these translators are free to use and can be used via the app or website pages.

Google Translate is an ideal choice for you if you’re looking for an application that can do all and provides the maximum number of languages. Even though the languages it supports are less than Microsoft’s Bing Translate, still it is acceptable.

Bing Microsoft Translator is an ideal choice if you need an app that provides effortless conversation translation in real-time, or if you’re looking to learn a new language. However, the development of the software is a bit vaguer than Google Translate.

So, this was our review comparison of both Bing Translate and Google Translate. Both these translators are the world’s top-performing translation tools and even better than the paid professional tools in some aspects. However, there are certain factors or functionalities that differentiate both the translators and make them unique to choose one for your requirements.